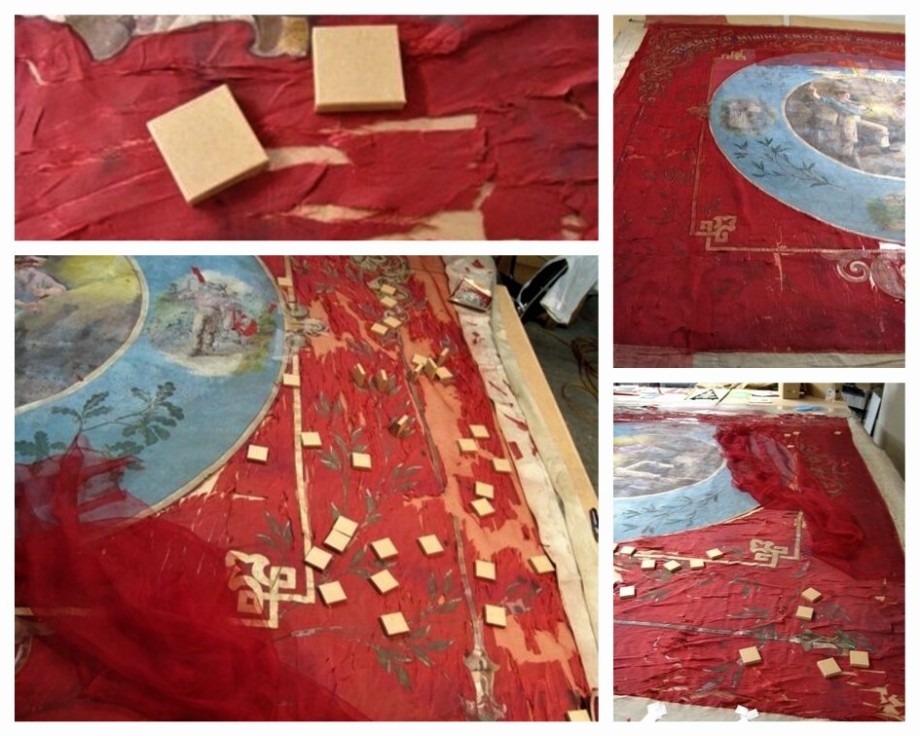 The large banners in the Sydney Trades Hall Banner Collection date to 1889. Our smaller banners were mostly from 1910.

The fabrics show much wear and tear from their years of service and the skills involved in maintaining the banners are quite specialised. Trades Hall has been very fortunate over the past 15 years to have been able to call upon the restoration services of Karen Coote, who runs Antiquities Conservation. Her skills, patience and tirelessness have seen many banners brought “back to life” and she has uncovered some unknown gems whilst conserving banners. Images here show the detail of the extent of the deterioration of the Tutill’s banner of the Mine Employees Union, the largest silk banner in our collection.

Work involved stabilising the silk, putting the fragments together on top of a new piece of silk dyed the same colour as the original as a kind of a giant banner jigsaw. Then Karen stitched the old to the new with a piece of silk thread drawn from the whole silk piece, then another layer on top and stitching that on in the same way. Then the edges had to be added to, washed and resewn. The images above show the extent of the deterioration, the use of new silk being attached and with weights to hold it in place. The repair job consisted of a lot of missing silk sections having to be recreated and replaced.

Tutill’s history as a banner maker began in the 1840s and there is much detail in John Gorman’s great book “Banner Bright.”

The Peoples History Museum in Manchester has a Textile Conservation Laboratory (shown in top left photo above) and visitors to the museum can seen the work being undertaken in real time. Many of the Banners on display at the museum had brief conservator notes alongside explaining the original condition of the banner and what had to be done to restore it the current condition of it being on display. 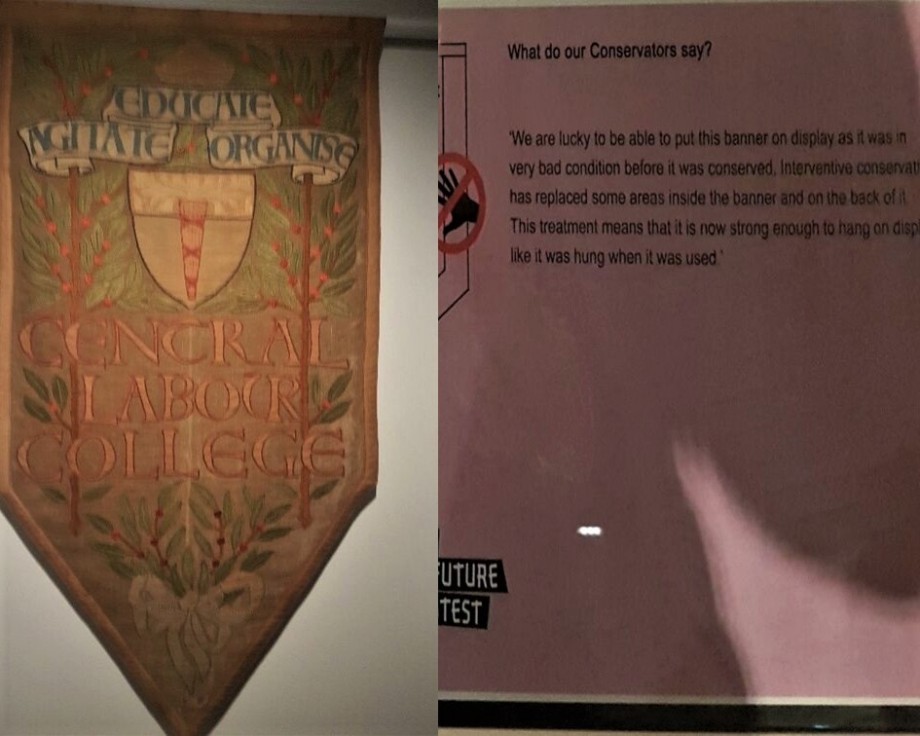 With the anniversary of the Eight Hour Day at the beginning of October, when the Sydney Stonemasons at the Mariners Church worked an eight-hour-day on the first Monday in October 1855. Eight-Hour-Day parades were happening all over Australia in the early 20th Century. Above are images and photos depicting various street parades all over New South Wales celebrating the Eight Hour Day. One of the first Eight-Hour day parades took place in 1871 in Sydney (top left corner above), followed by Lithgow, Wrightville (near Cobar) (top right corner), then 2 photos from Bathurst (centre left and bottom left), Orange (bottom centre) and Goulburn (bottom right corner). The Goulburn parade features the Australian Federated Union of Locomotive Engine-men, Firemen and Cleaners (AFULE) banner and was made by Althouse and Geiger around 1903, they made three of these banners for the AFULE.  In the centre is a photo of the original Eight Hour Day Banner hand made by Edgar Whitbread and family in 1907-1908 for the Sydney Eight Hour Day Committee that was restored only last year by Karen Coote to its former glory.

Retired unionists from the Australian Manufacturing Workers Union – AMWU and later the Rail, Train and Bus Union – RTBU were our largest tour audiences this month. Jonathan Mill from the Australian Council of Trade Unions – ACTU Organising Centre had a crew from the Industry Super Funds attend a tour too – so they could learn about learn about the history of the Trade Unions that support them. Kandos High School students also came along for a special tour as well.

A fitting tribute to Lorna Morrison (OAM) and Elaine Morey (formerly McDonald) is now on permanent display in the west side ground floor corridor. Lorna and Elaine played a huge part in the life of Trades Hall from the late 1940s until 2004.

Their legacy is the retention and conservation of the finest trade union banner collection in Australia. Their efforts in saving them has meant that these extraordinary works have remained as part of the heritage of Sydney Trades Hall.

We thank Lorna and Elaine for their immense contribution to the labour movement in Australia. Come and check out the legendary Lorna Morrison Banner Room – it contains the largest collection of Union Banners in Australia.

If you would like to host a union event, book launch, campaign or fundraiser – Sydney Trades Hall atrium is a terrific venue and space to do this. Contact Neale or Carmel for availability on 02 9881 5999.

Sydney Trades Hall is participating in the Sydney Living Museums Open Day Weekend – Sydney is Open Weekend on Sunday 3 November 2019.  If you don’t have a chance to check out Sydney Trades Hall during working hours during the week – here is your opportunity to do soon the weekend along with 80+ other historical buildings in the Sydney CBD. Guided tours will be available at 10am, 12pm and 2pm on Sunday 3 November.  If you wish to stay updated you can click on this link and sign up for news and information leading up to the event.